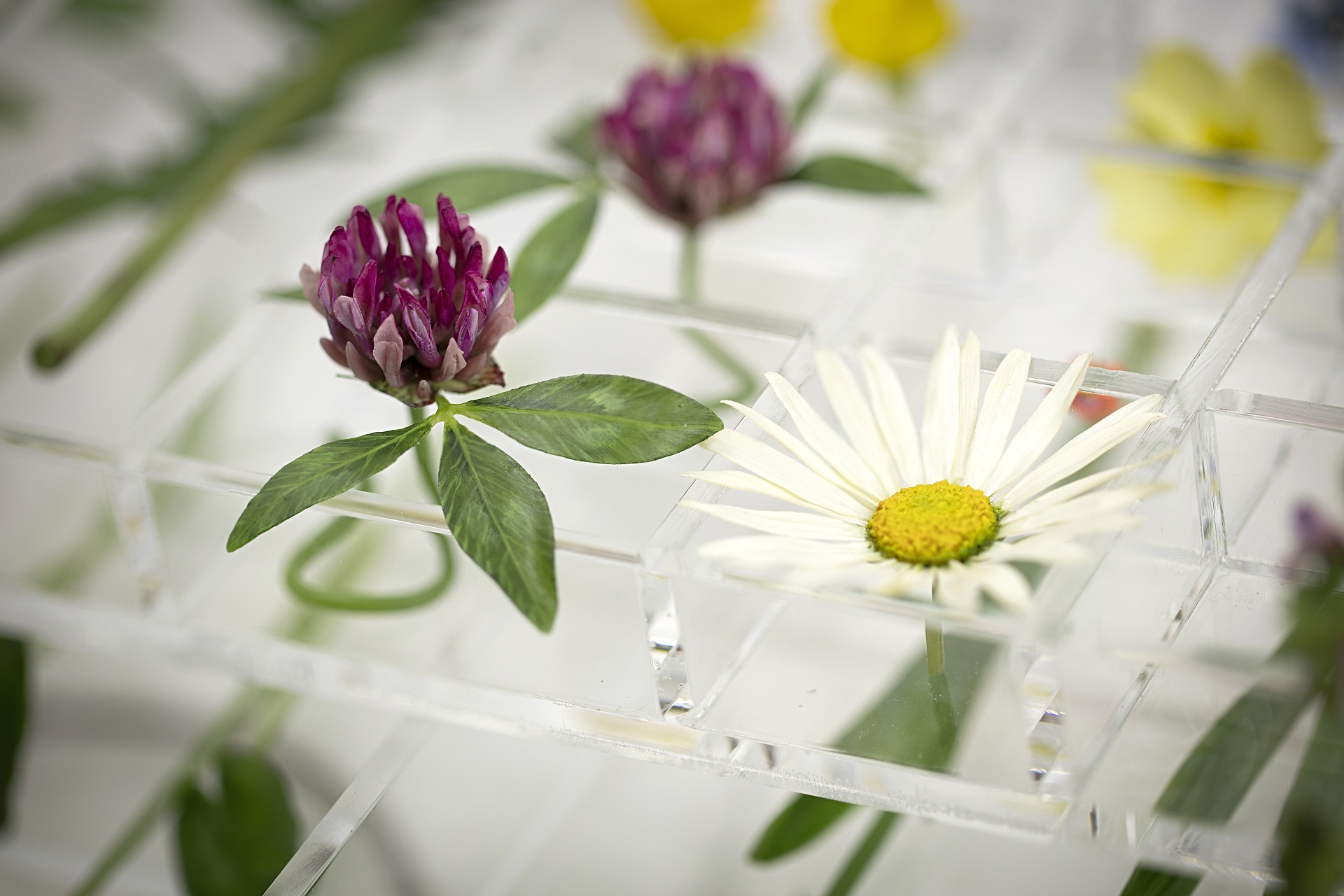 With only a few days to go until the Crafts Council Collect 2020 International Art Fair for Modern Craft and Design at Somerset House, my Collect Open beeswax wildflower installation is now complete and I’m able to share a little more information about the project and the finished artwork.

The wax that I’ve used for sculpting was collected by Scott from around 10 different honey bee colonies in central New York, some at the Dyce Lab for Honey Bee Studies and some from hobby beekeepers near the University. One sample was also taken from a commercial beekeeper who’s bees had just been used for commercial blueberry pollination in New Jersey. The beekeeper noticed that his bees were not doing well after pollinating the blueberries, so he sent wax, pollen, and dead honey bee pupae from his colonies to the lab for analysis.

The results of the analysis, conducted at the Cornell Chemical Ecology Core Facility, show an extensive list of pesticide residues in the wax samples. There is also a marked difference between the number of pesticides found in the wax samples taken from the hives used for commercial pollination services and those from hobby beekeepers.

You can view the full list of results here:

As my wildflower sculptures contain physical traces of these pesticide residues, I will be listing them clearly as the artist’s materials used to create my installation. (It is interesting to note that if Scott had sent me different wax samples from honey bees used for commercial almond pollination in California, my list of artist’s materials would have doubled in size.)

Beeswax has traditionally been used in the creation of scientific models for education and botanical sculpture became particularly popular during the advent of the public museum in the 19th century. Artists were able to use the life like quality and translucency of the medium to create realistic and beautiful representations of plants for gallery displays, in order to engage visitors with scientific discovery.

Here are just a few of the historic beeswax plant sculptures from the scientific collections at National Museum Wales.

My work for Collect Open 2020 continues this tradition, aiming to raise awareness of the widespread use of agricultural chemicals and the transfer of these chemicals from agricultural crops to wildflowers and pollinators, promoting discussion on the man-made issues which have contributed to the global decline of pollinating insects.

My installation of beeswax wildflower sculptures will be presented in a custom made jewellery box with the title Treasure. This can be interpreted in several different ways; as a noun meaning a collection of very valuable things, or a verb meaning to take great care of something because you love it or consider it very valuable. It also refers to a wealth which is hidden or buried, giving the viewer a hint to the value of the scientific information hidden in the beeswax samples.

Treasure poses the questions, what should we collect, protect and keep safe? What precious things will be of the greatest importance and value as we begin to understand the scale of change in this era of the Anthropocene?

For questions about the pesticide residue analysis on the honey bee wax samples or the research and extension activities at the McArt lab, you can contact Dr. Scott McArt directly by email shm33@cornell.edu or via Twitter @MaArtLab.

← The Names To Invest In Now, Elle Decoration UK Making a difference with The Design Trust →